Whether you’re planning to move or visit, choosing a destination between Toronto and New York can be a real dilemma!

Both metropolitan areas are the most populated cities in their respective countries, but how similar or different are they truly? Better yet, which city is better?

In today’s guide, I’m comparing Toronto vs New York head-to-head, so you can learn more about each city and decide which one is a better match for your needs.

40 Pros & Cons of Living in Toronto

Population-wise, both Toronto and New York hold the title of the most densely populated city in Canada and the United States, respectively.

In New York, the population estimates for 2021 revealed that the city has almost 8.5 million people living in it. As for Toronto, the population is close to 3 million, according to the city’s official website.

Even when I compare the population of the metropolitan area, New Yorkers surpass the Toronto region with around 20 million people vs a bit over 6 million. 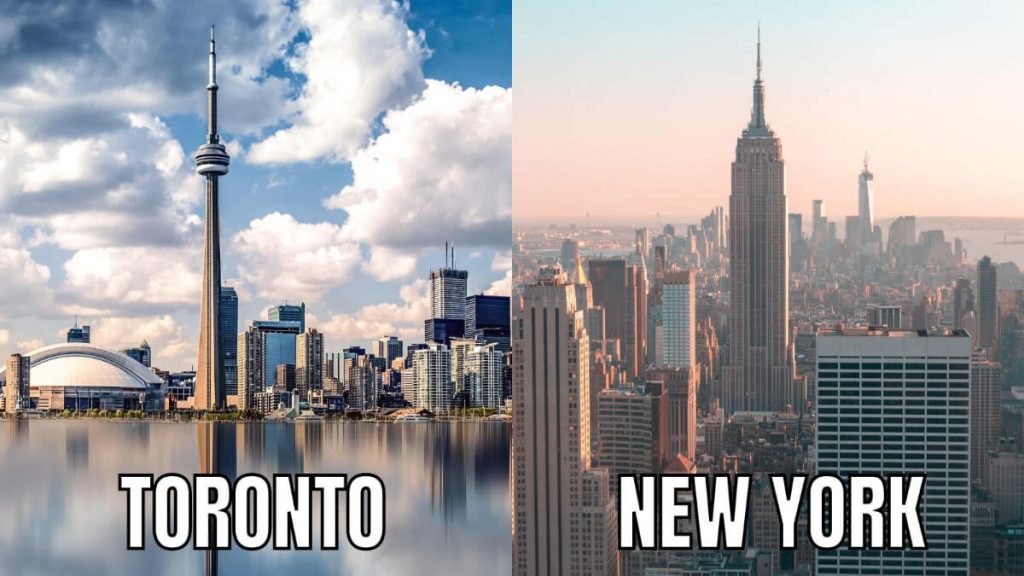 Aside from the well-known fact that Toronto lies in Ontario, Canada whereas NYC is in New York, United States, there are a few other aspects of the location and geography of the two cities that you should know.

For starters, Toronto oversees a body of water known as Lake Ontario. The southern point of the city is on the lake’s northwest shore.

You’ll also find Steeles Avenue at the northern border, the Rouge River at the eastern border, and Eglinton Avenue along with Albion Road at the western border.

Toronto is part of the Canadian mainland, situated on a wide sloping plateau with several river valleys cutting through.

Toronto has more than 1,600 named parks stretching over an area larger than 8,000 hectares. It also features more than 124 miles (200 km) of trails suitable for various outdoor activities such as hiking and biking.

As for New York, the city is coastal with a wide view of the North Atlantic Ocean to the south. You’ll find Westchester County to the north, Nassau County to the east, and New Jersey to the west.

The geography of New York city is made up of 5 counties or boroughs.

There are Manhattan and Staten Island, which are islands on their own. There are also Queens and Brooklyn, which are part of Long Island’s geographic composition.

The Bronx, on the other hand, is an extension of the US mainland. All 5 boroughs are connected by tunnels, bridges, and ferries.

Toronto was founded in 1793. Did you know that back then, Toronto was called York?

In 1834, the city was renamed Toronto as it underwent steady growth during the 19th century and had to distinguish itself from the other York.

Still, Toronto has been nicknamed Little York ever since it replaced Montreal as Canada’s economic capital and center of urban lifestyle.

New York, also known as The City That Never Sleeps, was founded in 1624 (almost two centuries before Toronto). It was one of the original thirteen colonies and became the first capital of the United States in 1788.

New York was where many of the Founding Fathers lived and is currently home to a load of historical sites and landmarks, including the Statue of Liberty, the Trinity Church, the Brooklyn Bridge, and the Empire State Building.

Although the climate in Toronto and New York offers four distinct seasons, there’s a major difference in temperatures — especially during winter months.

Not to mention, Toronto’s winters have a painful, biting cold with a lot more snow, whereas New York has drier and more pleasant colds.

Summer is nice in both Toronto and New York City.

Toronto is the financial and business capital of Canada, which makes it a target for many people seeking better economic opportunities.

It features rich industrial diversity as it serves as a center for technology, manufacturing, fashion, film, music, tourism, energy, food, and many other sectors.

The GDP (Gross Domestic Product) growth of Toronto grew by about 3.3 percent in 2017, reflecting the flourishing of startups and jobs in the region.

NYC is home to many of the largest banks, insurance companies, credit rating organizations, hedge funds, and business corporations in the world. Not to mention, it’s where the New York Stock Exchange resides on Wall Street.

America’s City has a fundamental role in the thriving of just about every industrial sector from commerce and real estate, to technology and entertainment.

The average salary per year in New York is USD 100,260, with the typical salary being USD 102,027. This giant economic hub easily surpasses Toronto when it comes to opportunities.

Both Toronto and New York are expensive to live in; they’re among the most expensive cities in their respective countries.

While Toronto will cost you hefty funds, New York will make an even more noticeable dent in your wallet. The following aspects should help put the cost of living in either city in perspective.

Accommodation in The Big Smoke will cost you more than in just about any other city in Canada.

The average rent for a typical 1-bedroom apartment in Toronto is around $2,200 as of January 2023. Compared to the previous year, this is a 25 percent increase!

The farther you move outside the city center, the more affordable the rents become.

If you think that’s pricey, you really won’t like what you’re about to read.

Accommodation in The Big Apple is one of the most expensive across US cities.

In NYC, you work to afford your rent, which can be pretty steep if you need a livable space in a somewhat good neighborhood.

The average rent for a typical 1-bedroom apartment in New York is around $3,700 as of January 2023. Compared to the previous year, this is a 13 percent increase.

Similar to real estate, the cost of groceries in Toronto is higher than in most other cities across Canada.

Although the prices vary from one neighborhood to the other and even from one store to the next, here’s a list of approximate average prices of grocery items in Toronto:

Similar to Toronto, groceries in New York City are more expensive compared to pretty much all cities in the United States.

Once again, prices vary from one neighborhood to the other and even from one store to the next. So here’s a list of approximate average prices of grocery items in New York:

Another living expense that you need to consider is the utility bills such as electricity, heating, water, gas, and so on.

Once again, New York City will have you spending more on utilities than Toronto.

The average price for utilities per month for 1 person in a 480-square-foot apartment in New York is around $120 and about $90 in Toronto.

The situation of the healthcare system in Toronto vs New York City has more to do with the difference in policies in Canada vs the United States rather than in the cities themselves.

In other words, since the quality of the healthcare system in Canada is better than in the United States (despite the long wait periods), this means that the healthcare in Toronto is superior to New York City.

Not to mention, healthcare is free in Canada (funded by the government and taxpayers) while you need to purchase medical insurance in the United States.

New York City has always struggled with cleanliness, with residents regularly complaining about how dirty it is.

Massive piles of trash bags in front of buildings are a common sight in NYC. Delayed collection schedules are the result of the lack of funds going into waste management facilities.

On the other hand, Toronto has a much better grip on waste management. You’ll probably never see a trash bag waiting on the street, which means walking on cleaner roads and breathing healthier air.

Toronto and New York are pretty much tied when it comes to public transport. Both cities are well-connected with an extensive network that can get you anywhere you want.

That said, it’s a lot easier to grab a cab in New York than in Toronto. You can simply find one standing in the street for less than a minute in New York, but you have to call ahead for a taxi in Toronto.

Being the economic capitals of their countries, Toronto and NYC are loaded with exciting entertainment options

While both cities offer a wide range of museums, clubs, restaurants, sports teams, and so on, New York City has a clear edge with its killer nightlife and world-famous destinations.

Additionally, both Toronto and New York City are good cities for family life. Besides the diverse cultural and entertainment outlets, they feature many fine schools and childcare programs.

Last but not least, safety is another category where Toronto comes on top.

According to the major crime indicators shared by the Toronto Police Service Records Management System, the total crime rate has increased by 17.6 percent.

As for New York City, the 2022 crime statistics report shows a 23.5 percent increase in major categories -including murder, robbery, burglary, assault, rape, and grand larceny- compared to the previous year.

Toronto vs New York: Which City is the Better?

There you have it, a comprehensive comparison of Toronto vs New York so you can pick your ideal city to stay in!

As you can tell by now, both The Big Apple and The Big Smoke are great places to live and visit, with each of them offering a unique set of pros and cons to help you decide.

While Toronto is generally more affordable than New York, the economic opportunities are better in the latter, with higher average salaries as well.

Toronto is the winner when it comes to safety, family friendliness, and cleanliness. However, New York takes the lead in terms of weather, entertainment, food, and public transportation.

While Toronto is more welcoming and slow-paced, New York is bustling and rewarding. All in all, these cities are two of the greatest in the world!

Vancouver vs Seattle: An In-depth Comparison

Is Canada a Good Place to Live? (as a Foreigner)

35 Side Hustles to Boost Your Income in Canada

40 Pros and Cons of Living in Toronto

Is Canada a Good Place to Live?

23 Pros and Cons of Living in Vancouver