Vancouver vs Seattle: An In-depth Comparison

If you’re planning to move out to the Pacific Northwest, you’ll have plenty of cities to choose from.

However, the biggest and most popular cities in the region are Vancouver and Seattle. So which one of them is better?

In today’s guide, I’ll put Vancouver vs Seattle in a head-to-head comparison, so you can find out more about what makes each one of them unique.

I’ve visited both Vancouver and Seattle, and they have their own unique charm and set of pros and cons, so let’s dive in.

Pros and Cons of Living in Canada: Should You Move Here?

Vancouver is one of the most prominent cities in Canada and the most populated in the Province of British Columbia.

Although the region has been settled for thousands of years, it was established as a city in March 1870 as “Granville”.

The city was then named after “George Vancouver”, who explored British Columbia back in the late 18th century.

Vancouver is a major seaport and a vital trade link between Canada and East Asia, as well as other markets.

Like Vancouver, this one is a seaport that connects the United States with vital markets around the world, especially East Asia.

Seattle was founded in November 1851 but was incorporated as a city in 1869. The city is named after Chief Si’ahl, a prominent Native American figure.

In the following section, we’ll have an in-depth look at the two cities and how they compare to each other from various perspectives. Let’s check them out: 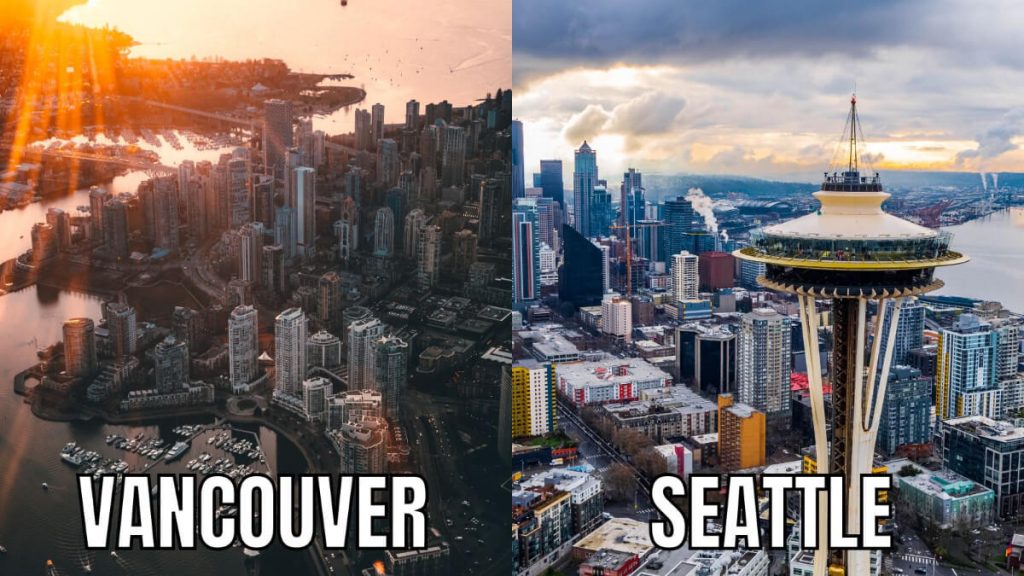 Since both cities lie in the same geographical region, they share some similarities. For example, both harbor/coastal cities are located at either end of the Cascade Mountain Range.

The two cities are only 142 miles away from each other, and you can travel from one another in around 2.5 to 4 hours.

The highest elevation in Vancouver and Seattle is also pretty close, around 501 ft and 515 ft, respectively.

Vancouver’s overall land area is 44.47 square miles, which is a lot smaller than Seattle’s total city area of 142.07 square miles.

Vancouver is one of the most racially/culturally-diverse cities, not only in Canada but in all of North America.

Seattle is also racially diverse, with various reports ranking it as one of the fastest-diversifying cities in the last decade.

Both cities offer immigrant-inclusive communities, although experiences may vary from one individual to another.

According to the 2021 Census, Vancouver’s population is a little over 662,248, which translates to a population density of 14,892 people per square mile.

On the other hand, Seattle’s population in 2021 was around 733,919. While Seattle has slightly more people, the population density is far lower at 8,775 people per square mile.

Although the two cities are very close to each other, there’s an obvious cultural difference between the two, which simply boils down to the lifestyle and identity of their respective countries.

Another aspect that the two cities are pretty much the same at is the weather. Both cities are known for their relatively cold climate, although the temperate ocean climate keeps them fairly warmer than other cities towards the east.

Summer in both cities is short and very comfortable, as it rarely gets too hot there. However, Winter is noticeably longer, and it’s almost always raining in the two cities.

In Vancouver, the average temperature lies within a range of 35 °F to 73 °F throughout the year.

Seattle, on the other hand, is typically 2 to 4 degrees warmer on average, although the city receives more days of snow due to the city’s proximity to the mountains.

The economy of a city has a huge influence on many aspects and is always considered a key factor when considering a destination over the other. So let’s see how the two cities do in that regard:

According to PayScale, the average salary in Seattle is around 87,000 USD per year.

One thing you should know here is that both Seattle and Vancouver have a relatively higher average salary than the national average of their respective countries.

The banking and financing sector in both Vancouver and Seattle is quite healthy due to the flourishing economies of the two cities.

In Vancouver, the mortgage interest rate over 20 years is around 4.52%. As for Seattle, it’s a bit higher at 5.41%, but more about that in the sections below.

Taxes and deductibles are other essential aspects to keep in mind while looking at finances, as some cities offer very high salaries but with equally high taxes.

Seattle has a 3.75% sales tax that is independent of the State of Washington’s sales tax of 6.5%. This means that Seattleites pay a combined sales tax of 10.25%.

Seattle is one of the few cities in America that has no income taxes. However, in the United States, there’s a Federal income tax that averages from 10% to 37% depending on your personal annual income.

Vancouver has a 5% Goods & Services Tax as well as a Provincial Sales Tax of a standard 7% for a total of 12% (equivalent to sales tax).

Of course, higher taxes isn’t necessarily a bad thing, especially when the taxes make up for cheaper services, such as healthcare and education.

Keep in mind that property taxes in the United States are much higher than in Canada, so your overall taxation advantage may vary depending on your situation and needs.

Salaries alone can’t give you a full picture of the purchasing power in a certain place. In this section, we’ll focus more on the potential expenses and costs of living in each city:

Whether you’re renting or purchasing a property, you should expect to pay more in Seattle than in Vancouver.

For instance, a 1-bedroom apartment in Vancouver’s city center may cost you around 2,400 USD a month, while the same room in Seattle costs around 3,200 USD a month (an average of 25% to 30% higher).

With that being said, buying is a completely different story, as Vancouver is known for being the most expensive housing market in Canada.

On average, you should expect to pay up to 20% to 30% more per square foot while buying in Vancouver than in Seattle.

The reason here is that supply is much lower vs high demand, while the larger land area of Seattle makes properties a little easier to come by.

Owning a property is pretty much the only aspect where Vancouver is more expensive than Seattle.

When it comes to groceries, most products, including fruits, vegetables, meats, etc., are around 20% to 25% cheaper in Vancouver.

This doesn’t only apply to the fresh market but also to processed/canned food, snacks, meals at affordable and fast-food restaurants, drinks, etc.

Of course, there are some products with a specific markup in Vancouver due to certain laws, such as cigarettes, which are more expensive than in Seattle. However, you should typically pay less for the average monthly groceries in Vancouver.

In Vancouver, you should expect to pay significantly less money for basic utilities, including electricity, water, heating, and garbage, which is usually around 120 CAD or 88 USD for a small apartment.

On the other side of the border, Seattle is notorious for its remarkably high utility costs. In fact, for the same usage mentioned above, you may pay up to 320 USD per month, which is around 165% more expensive!

The two port cities have attracted tons of investments and businesses over the years, which offered a lot of job opportunities in various sectors and helped in keeping the unemployment rate relatively low.

Seattle’s most in-demand jobs are all in the data and technology sector, such as web developers, research analysts, data scientists, cyber security analysts, etc.

As for Vancouver, the jobs in demand are slightly more diverse, including teachers, chefs, web developers, sales associates, and more.

Canada also has a free healthcare system, which makes up for the higher taxes in Vancouver than in Seattle, especially without medical insurance.

Safety is another aspect where Vancouver is a clear winner against Seattle. The crime rate in Vancouver is very low, despite being higher than the national average.

Despite being relatively safe, Seattle’s crime rate (both violent and non-violent) is noticeably higher than Vancouver’s.

School education in both cities is fairly decent. Although Vancouver is slightly better in terms of quality, there’s a wider variety of public and private options in Seattle.

This also goes for higher education, although Seattle has a wider variety of universities and colleges.

Gas prices are currently more expensive in Vancouver than in Seattle, but that changes often. With that said, public transit in Canada is cleaner and more affordable.

Seattle has a decent public transport infrastructure that makes the city more interconnected, but the city is still very car-dependent. On the other hand, you can live in Vancouver without a car and still get by easily.

Both cities are blessed with a beautiful mountainous backdrop and an extensive coastline that makes them great places to go out and enjoy your time.

With that said, nature is much closer to you in Vancouver than in Seattle. The air in parks is also cleaner and fresher, which makes hikes and camping trips more fun north of the border.

If you prefer urban outings and hanging out in the city, especially to eat, you’ll also find a nicer variety of restaurants with more delicious cuisines in Vancouver.

However, if you’re into culture and urban outings, Seattle is the way to go!

There are larger and better malls in the city in addition to various theaters, stadiums, museums, and much more. Additionally, coffee is unmatched in Seattle!

The internet in Seattle is more expensive than in Vancouver while being slightly better. This makes Vancouver more cost-effective than Seattle.

According to Speedtest, the average broadband download speed of 94.84 Mbps with 27 ms latency.

As for Vancouver, the average broadband download speed of 94.59 Mbps with 21 ms latency.

Vancouver vs Seattle: Which City is Better to Live in?

There you have it! A brief guide that compares Vancouver and Seattle, so you can pick the ideal side to live in!

As you can see, both cities are great places to live, and each one of them has its own set of pros and cons.

While Vancouver is more affordable than Seattle, the latter offers better job opportunities with higher salaries, so it depends on your current source of income and the demand for your occupation in the city.

In terms of education, safety, and quality of life, Vancouver can be slightly better. The city also has better food quality with more diverse restaurants.

However, Seattle beats Vancouver when it comes to universities, services, and bigger brands. The transport system of Seattle is also slightly better despite being more expensive, but all in all, the two cities are absolutely amazing places to live!

Is Canada a Good Place to Live? (as a Foreigner)

35 Side Hustles to Boost Your Income in Canada

40 Pros and Cons of Living in Toronto

Is Canada a Good Place to Live?

23 Pros and Cons of Living in Vancouver